I think it would be nice to have an option to confirm if you really want to run from a Temtem during a radar.

This is the kind of thing you never imagine will happen to you, but one day it will, so... there be room for one more in the club? 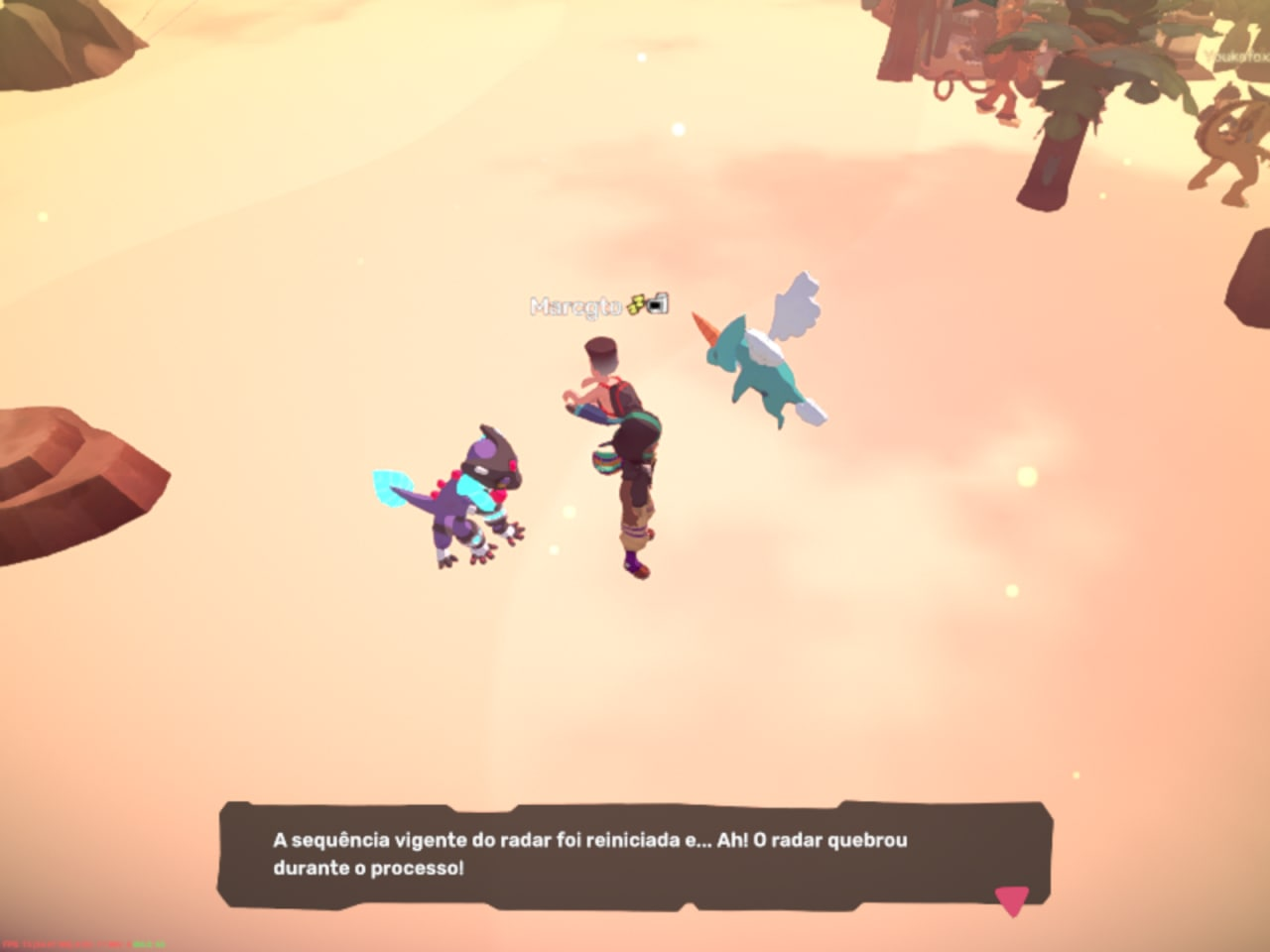 I won't repeat myself too much, after all, what do we have, like 5 to 6 posts on exactly the same subject?
But man I'm really frustrated right now... I don't have that much time to play so I've been doing a single radar for 3 days and a few minutes ago when I was going to select the bag to thrown a Temcard on Temtem I accidentally hit run and I screwed up with everything.

Before someone tells me ''You should be more careful'' I was being careful, so much so that I only clicked run when I was in my second Temtem's move, on my first Temtem I selected the Temcard with no problem, the reason I clicked ''run'' is because the game runs at only 10-20fps on my PC (as you can see in the image,
try to do anything that requires precision with such a low frame-rate and using a controller connected via bluetooth, I challenge you.) and as I play the controller via bluetooth sometimes the input-lag repeats the same movement or ignores one of your inputs, Couple that with the fact that the Switch Pro Controller's d-pad isn't one of the best and you'll have the reason why I accidentally hit run.

I know this post will probably end up like all the others posts, but man... this has been a problem for many for so long and even I didn't think it was such a ''big deal'' because I didn't care much for radar, luma hunting and etc... because I'm was just a casual player and now I'm facing the same problem, isn't there really any solution for that?

This discourages anyone making a radar for the first time from trying to do it again, not least because doing the radar is not a guarantee that you will get a Luma.

And I say this because this is only the third time I'm doing the radar (as I said, until a while ago I was just a casual gamer, and I didn't really care about luma hunting, I just played for fun before) and now I never want to do it again so I don't run the risk of having hours playing thrown away.

Alternatively, if Crema does not want to do changes to breaking of radars, there needs to be an improvement in UI and in systems:
(example: Add a small delay when moving Cursor after using keyboard/controller input )

With how many people break radars and how negative this experience is, especially now that 5-10% radars are not available, breaking radars should not be a thing. Maybe the radar overheats and does +10 or +25 encounters when you make a mistake, so the punishment is much much smaller.

On that suggestion,i'd purposefully fail over and over again till i hit 200 encounters and have the increased luma chances.
(Do note i have given up on scamdars after doing 14 in a row with no luma)

What could be done instead,is reduce your maximum encounters. As in, failing would drop you to a maximum of 375 instead of 400.
That in a sense guts your chances on the last tier,but doesn't completely disregard your time and effort.

I've done a lot of radars and I've only ever accidentally ran away and broke one once. Does it happen? Sure. Do we need Crema to put bumpers up so we can't mess up? I don't think so.

Obligatory "This change literally does not hurt a single soul on the planet in any marginal way and many people have already vocalized that it would improve the game for them" post.

Really not sure why this is still so controversial when in 10+ threads on the matter not one good reason against it has been formulated. Even the staunchest opponents have not put forth an argument for how this has any negative effects beyond "we don't need it" and "just live with your mistakes lol".

I think the fact that the topic consistently keeps being raised contributes to the validation of the problem. I find it funny that the people who are opposed to changes to this system are also consistently equally vocal and convicted of their opinion; it's almost become a meme lmao. I believe in one of those threads I left a lengthier post about system robustness in there. And I definitely lean towards re-evaluating current systems to optimize them against user error. Preventing user error is another thing; people are always going to make mistakes and a reflective individual will most likely take, at least, some of the responsibility of their error.

So how do we optimize the current system, in my opinion?

I think there's three areas where Temtem could sensibly improve design. Some of these solutions were suggested already.

Contradictive actions
Why would one *ever* want to attack with one Tem and try to make an effort to run with the other? The actions are completely contradictive to one another and almost have to be a result of user error that has not yet been applied. Implementation of a safety in the form of a confirm prompt makes a lot of sense to me. The prompt could have one of those "do not show me again" ticks somewhere else on the screen for the people that like to live on the edge. That tick could be turned into a setting.

Running from a radar
Unless one is tired from a radar, has enough breedstock and never did the radar for the chance at a Luma to begin with, I don't see anyone willfully running from a radar. And even then, one could still kill the current radar Tem in the fight, leave the radar on, do some other things in the game which do not involve breaking the radar and come back to the radar if they changed their mind for whatever reason. And if they don't change their mind, they could just continue killing or catching whatever other thing they want to do and the radar will just break by itself. There's just such little reason for anyone press run right there and then, during the radar. So how does one improve this system while not being much of a change to the people that do want to run from a radar? The same way the current abort-evolution prompt works. It checks player intent and that's all it does, with minimal time wastings. I don't think most players need more than half a second to identify they're holding the run button and react to it by letting go. A half-a-second progress bar that is only active in radar fights seems like a perfect solution to me.

Identification of radar fights
Currently, there's four ways to identify the fight you engaged with is (not) a radar fight:
- Radar fight identification prompt
- Tem level is over the range of the patch's levels
- You're fighting an evolution of the radar Tem
- There's a non-radar Tem present

One is temporary, two are not always the case and one is a clear and permanent indication you can run, respectively. The game "fixes" the problems of the first three identifiers by letting you kill radar Tems that weren't found using the radar without breaking it. But why leave it at that?

You've made the conscious choice to engage with a feature that takes at least a good few hours to complete. You either do it for the SVs or for the chance at a Luma. If you find that Luma it's made painstakingly clear it is one. Its colour is different, it often has more shiny edgings. Even for the colour-blind; there's sound, there's an icon. Except for its sound, these are all permanent identifiers. So why would we leave permanent identifiers solely to the Luma, which arguably is only a part of the radar? The game already has a radar icon design. It would be a no-brainer to put such an icon in the fight UI somewhere, or apply it like the Luma icon is applied to Lumas; just have it sit on the Tems itself. What do such suggestions really "ruin" for the people that want others to take responsibility for their mistakes?

As an addition to radar fight identification it could be a fresh change to have the fight engagement sound be a different one from the normal one. This could have prevented my sole radar-run mistake. You know how you're sometimes running around and the radar Tem spawns on your player and was not even visible? That happened to me while I was travelling back to the Zephyruff/Volarend spot to continue the radar. I forgot that other, earlier patches, also allow for the ability for Zephyruffs to spawn and one did, in that invisible manner. Still in a mindset of just walking to the spot I wasn't really looking at the game screen and at a stream instead, and I ran from the encounter. I'm perfectly willing to admit it was a mistake I made. I should've looked at the screen, after all. One thing that could've helped me would have been a different fight engagement sound, and I see little reason to not look into such a change.

I do not leave a personal anecdote in the latter part of this whole post to "whine" about the game's design and how my mistake could have been prevented by more player friendly game design. I didn't look at the screen, I made a mistake, period. This does not mean I'm not entitled to suggest a means which could help others not make the same mistake.

Another big post yayeet. Thank you for reading my TEM Talk. (Haha see what I did there? )

TL;DR. Yes run-button design during radars leaves some room for errors. (Not) taking responsibility does not mean we can't suggest ways for the game to sensibly improve player experience. Improvements could be; a confirm prompt for contradictive actions (which could apply in general), a progress bar for running during a radar and more robust radar fight identificators.

soliloquy said:
Obligatory "This change literally does not hurt a single soul on the planet in any marginal way and many people have already vocalized that it would improve the game for them" post.

Really not sure why this is still so controversial when in 10+ threads on the matter not one good reason against it has been formulated. Even the staunchest opponents have not put forth an argument for how this has any negative effects beyond "we don't need it" and "just live with your mistakes lol".
Click to expand...

Honestly just waiting for a certain toxic poster to come in saying that exact kind of thing since they feel their subjective experience should dictate what gets done with the game. I'll never understand why we even need to keep having these kinds of discussions like it's some major change that needs careful consideration. It's a straight forward benefit to anyone if radar encounters can't be prone to human error.
A